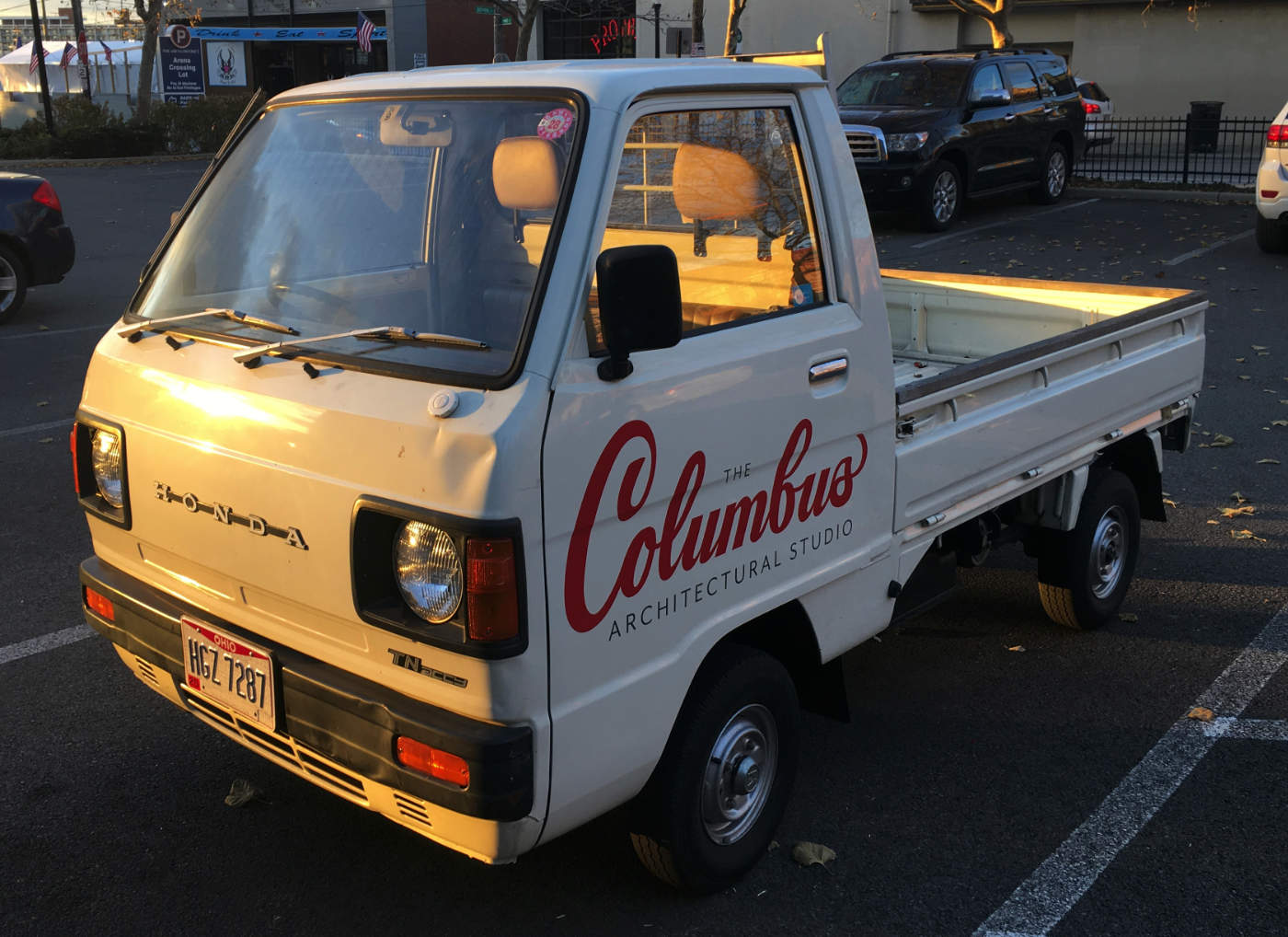 This is how we roll

What the hell did I just do?

The internet reinforces bad habits. I subscribe to a RSS feed for the web auction site Bring a Trailer. It specializes in unusual cars. I enjoy finding weird vehicles and then challenge my wife’s patience by forwarding her links with a headline “This is what you need.” Let me preface by sharing that my wife frequently talks about gardening and occasionally is try to devise ways of transporting bulky plants in her two seater convertible. Once every six months a Japanese mini truck would come up for auction, and I thought this would solved all of her gardening needs. I’m just being helpful.

Con’s: Cars made for the Japanese market are right side drive so everything is mirrored. The truck’s engine is a two cylinders with 547 cc of displacement, produced 29 horsepower when new and doesn’t go faster than 90 kph (55 mph).

On a lark, I entered the auction and with 15 minutes left had the top bid when a challenger raised me. His bid was still under my max price, so I anted up. My thinking was to get the other bidder to counter. Then nothing, time elapsed and I had won the auction. Yeah! Yeah? Oh Crap, I won. The Seller was an import dealer in Orlando, Florida. They had gotten the car from a museum in Japan and offered to arrange transport from Florida to Columbus, Ohio. My wife and I thought it would be fun to drive the car back. So we made flight arrangements and cleared our schedule for a mid October two days, 1000 mile trip. 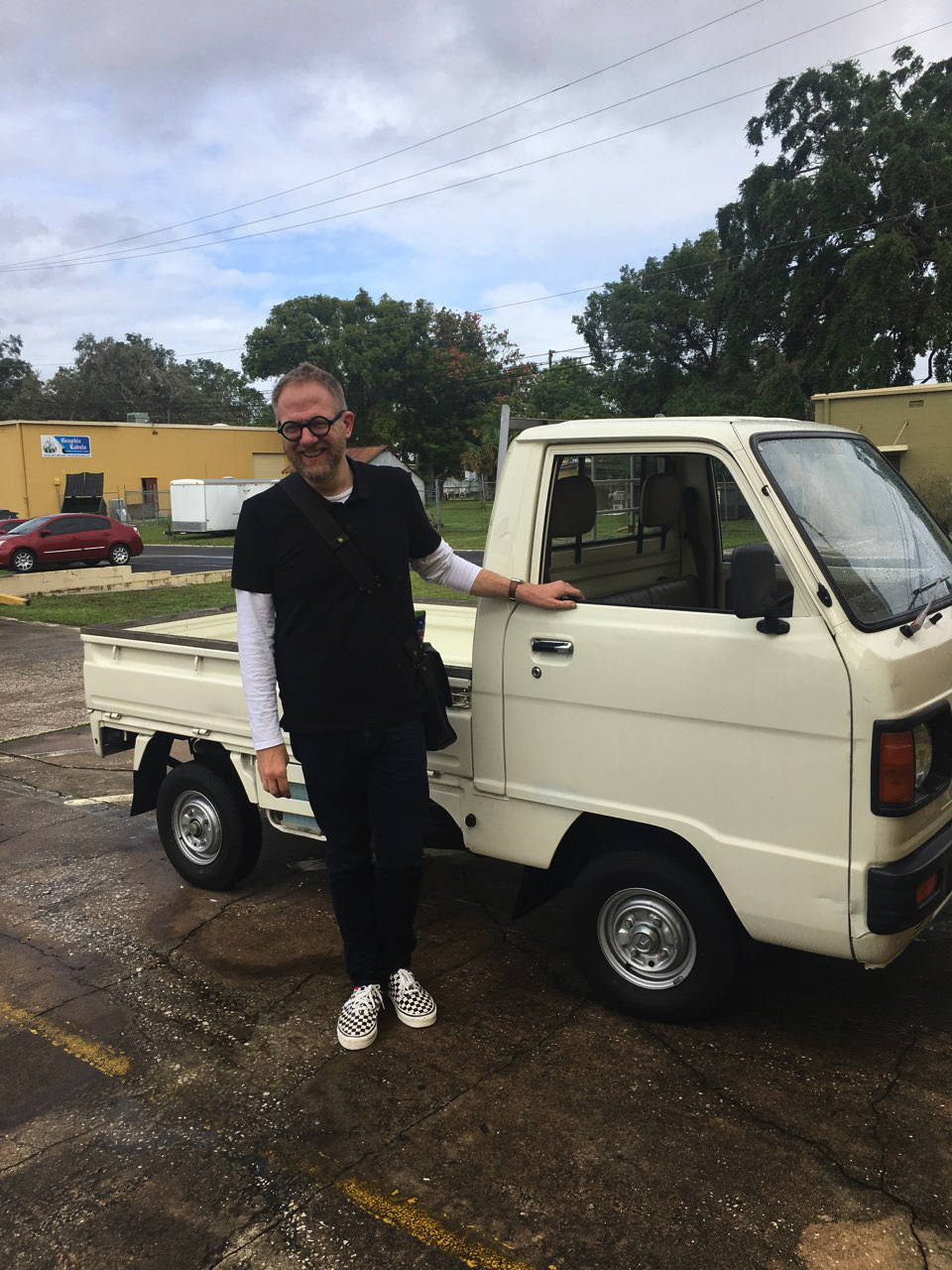 Wednesday: Uneventful flight, landed around 11, got the truck, had lunch, and hit the open road. For the next 8 hours had a pleasant drive except to discovered that if you took the truck to 90 kmh (around 55 mph) it made a horrible buzz (that must be the speed limit in Japan). Since we are limited to under 55 mph we took back roads and used the maps app on our phones, which quickly drained their batteries. So we stopped at a gas station to get some “paper maps.” When did gas station stop carrying maps and started calling them “paper maps”? I think there should have been a memo. Instead of a $3 map they do sell $35 phone batteries. Driving through Florida Yen started to called the truck Mr. Acty. We made it to Alma, Georgia in about 8 hours. Stopped for dinner. Asked for a booth to charge all of our non-paper maps. We figured out at this rate, we will not make it to Columbus until Friday afternoon so why not stopped for the night. I had planned on staying spending the night at the historic Poinsett Hotel in Greenville, South Carolina for the evening. To quote the American Philosopher Mike Tyson “Everyone has a plan until they get punched in the face.” So, we found a Days Inn where you check in through a security window not unlike a KFC’s drive through.

Thursday: We get up early, drive off and made it to Pickens, South Carolina (another 8 hours) at which point Mr. Acty would NOT go uphill without a lot of jerking. Maybe it’s overheating? Luckily we were in a town so we stopped to let the engine cool down and had lunch. We started off again – still lots of jerking…Four mechanic shops later, we finally got someone to even go outside and look at it. Burnt spark plugs. The mechanics, also named Dan, said there’s a part store nearby and will be back in 15 minutes. Half an hour later, he comes back -no spark plugs. The first store doesn’t have what we need, and the second store just closed but it will open the next day at 8am. We cab it to the closest town with a motel, the Quality Inn in Easley, South Carolina, still not the Poinsett Hotel, but at least the front desk is not behind a security window. Discovered the only nearby restaurant opens “on selected Evening”, this was not a selected evening. The other choices was the Easley Bowling Alley, or call for delivery. Which we did: chicken wings and a salad.

Friday:  Cab it back to the car shop, asked Dan to change both plugs. Kept the spare and finally took off about 9:30am. We made it over the Blue Ridge Mountains and stopped for breakfast. Yen thought thought that was tough but at least we made it over the mountains. I then pointed to the map- we still had the Appalachians ahead. The first two days where relatively flat. Our last day, and 400 miles, took us through some serious mountains, the Appalachians. I grew up in the west and I had always thought of the Appalachians as tall foothills, but riding as the passenger on the left side of Mr. Acty, with oncoming traffic, as Yen weaved up the mountain pass – these foothill sure seem a lot like mountains. We stopped in North Carolina and got a transmission oil change. The mechanics there thought the truck was hilarious so only charged us for a quart of oil. Every where we went we would get get waves, thumbs up, and even a group of elementary students on recess shouting “we love your truck” as we passed their school. 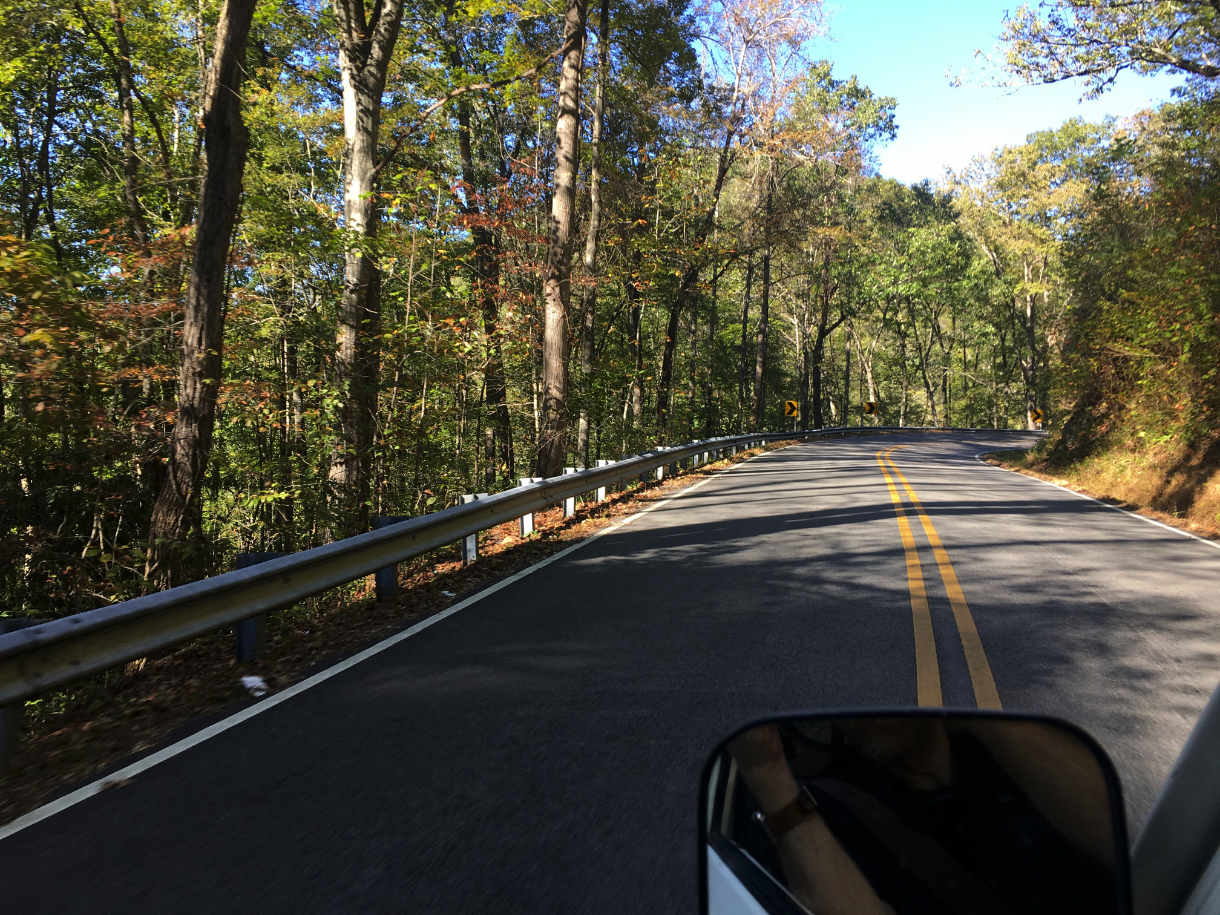 Driving through the Appalachians- I’m in the passenger seat- notice the yellow line.

7:05 pm The sun was setting as we approached Louisa, Kentucky (150 miles from home but the mountains had not been kind to Mr. Acty) at which point it A LOT of weird popping noises started to come from the engine. We thought about stopping at a Valero gas station but decided we would try to make it to town.
Mr. Acty died. It’s dark. There’s no phone service. No one in sight.
We walked a mile back to the gas station, asked to use the phone at which point two men, who seemingly had nothing to do on a Friday night, asked us what’s wrong and offered to help. We get into one of their pickups at which point one said “You’re safe with me. I’m a Christian.” We were not nervous until he told us that. But between the two of them, they had enough tools to changed out the second burnt spark plug. Jimmy O’Brien, the Christian,  gave us directions to an auto parts store. “Over the hill, past three red lights, turn right at the castle looking building, and get yourself some tools.” We offered to pay him for his troubles and he said “no need just tell people that Jimmy O’Brien helped.” People- Jimmy O’Brian helped. We were very grateful and managed to sputtered to the Autozone.
8:55 pm The Autozone closes in five minutes. We explained what we needed: two new spark plugs, a spark plug socket, an extender, a ratchet wrench. And most importantly with both us turning fifty approaching, “Can we use your bathroom?”
9:00 pm The parking lot is empty. We had potentially more than four hours of driving in through eastern Kentucky and Southern Ohio. I asked Yen what she wanted to do? She said “I would like to have Mr. Acty towed and rent a real car to drive home.” So we went back into Autozone and asked for towing service recommendation. Jim Perry answered our call and said that the was in town so will stopped by to take a look.
9:17 pm Jim came with his wife and a man named Steve. As he drove up, looked at our truck, rolled down the window, and said, “Well that is so little you could just put it in your pocket.” Then asked where we were going, “Sure I can tow you to Columbus.” What were we planning to do? “Is there a car rental place nearby?” “Nope, this is a one horse town. But there is an Enterprise at the Huntington, WV Airport, we can get you a ride there.”
I immediately call Enterprise to reserve a car. Jim Perry called his Sister who runs a hospital transportation service. “Hey Girl, how would you like to make some cash tonight?” She came with her daughter who is probably 30 years old and we take off to the airport 28 miles away.
9:36 pm Half way there, the local Enterprise agent called and said the national reservations didn’t know what they where talking about and the Huntington Enterprise have been out of cars all afternoon. I called Hertz they have one car left and they closed at 10 not 10:30 like Enterprise, but “Don’t worry Darling, I’ll hold it for you.”
9:54pm We pull up to the airport, I bolt out the door. Yen paid the Daughter. The airport is small. It’s a single loaded corridor that has two ticket counters, a hallway, and the car rental counter. We get the last rental car. Yen and I each stop by the bathroom before making the last stage of our trip. It took five minutes for Yen to get use to a car with modern brakes and having the turn signals on the left side, but we hurtle home at well above 90 kmh.
12:10am (technical Day Four- and my 49th birthday) We make it home. 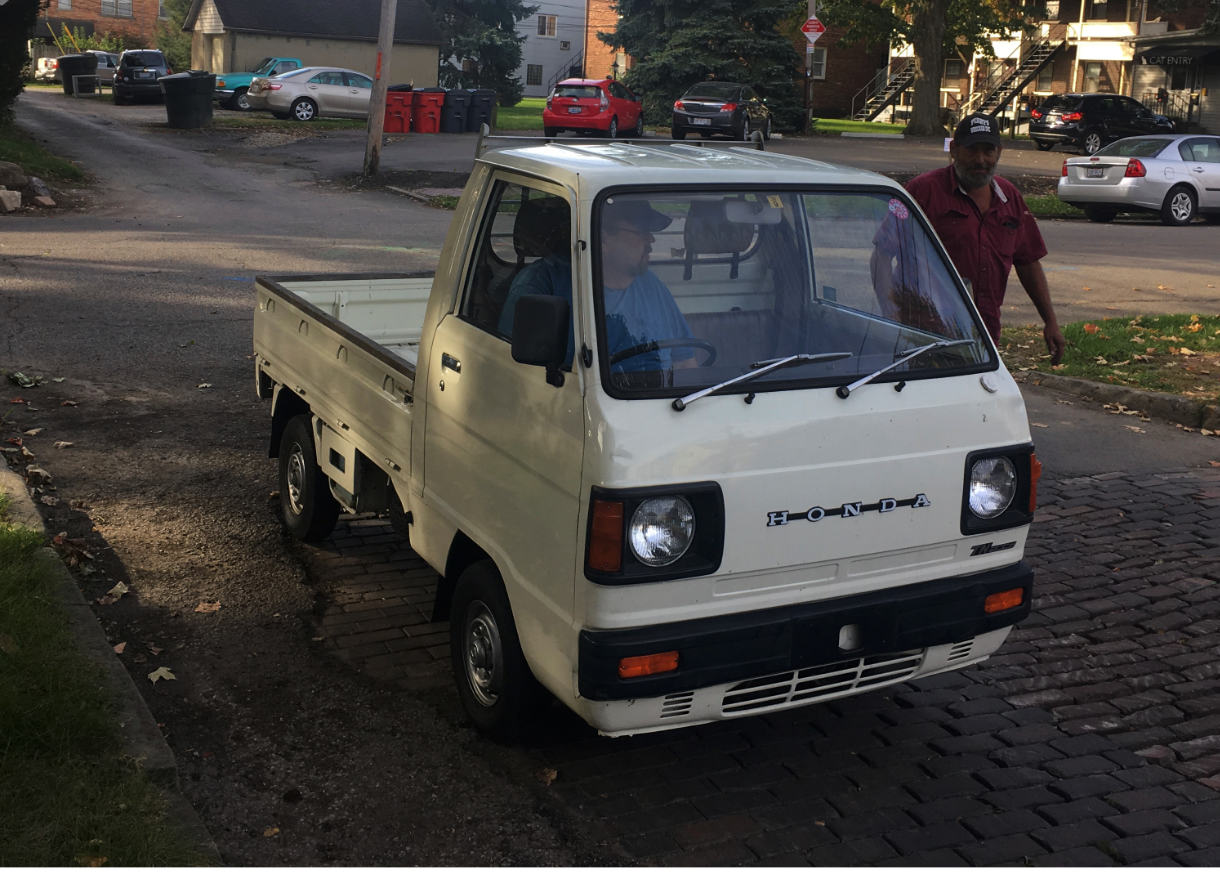 Jim and Steve behind the wheel, make a delivery in Columbus

Saturday: Jimmy Perry, (who used to race cars and has a bad back) and Steve (who does most of the work because of Jim’s back) show up at our home at about 9am. I ask how much it is, I added an little extra, he said that was too much, but thanked us and gave us some advice on the burned out spark plugs “It’s got to do with the air/gas mix. Get some carburetor cleaner and see if that might cure the problem.”
I did that and it is running great around town. 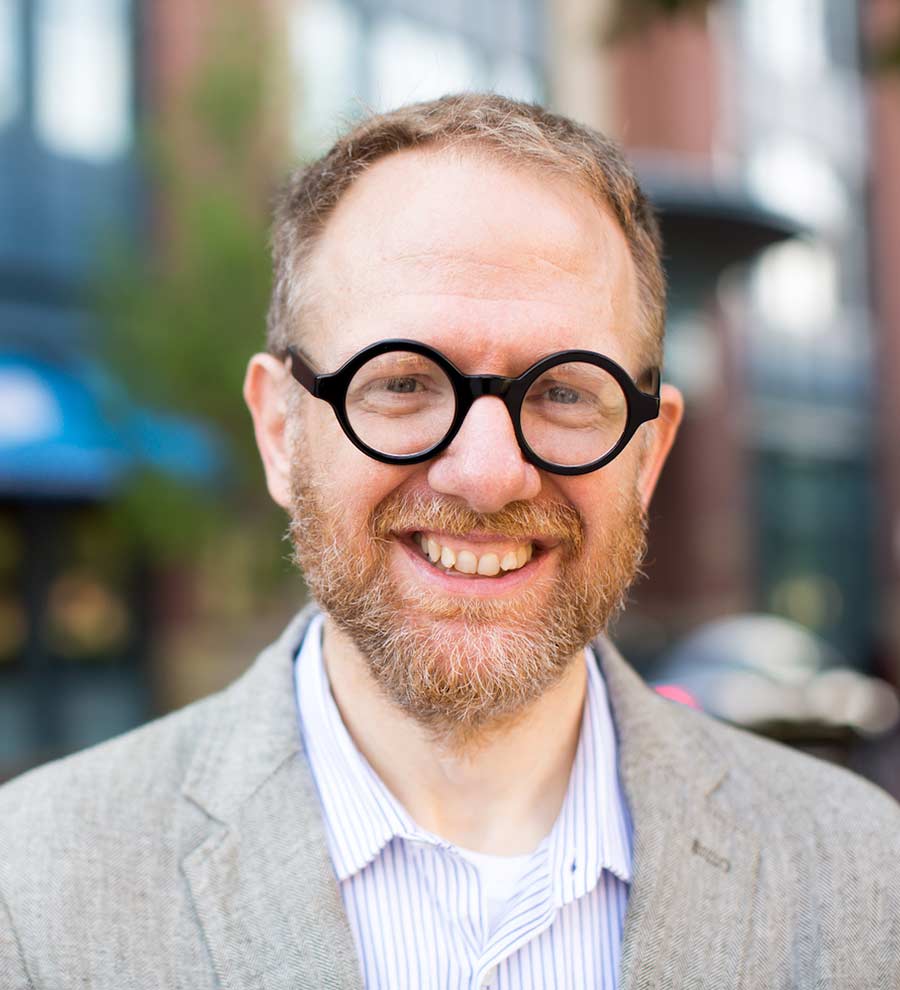 Danial was born in Alaska to Midwesterners who were long on love but short on spelling ability. He grew up in many cities and Air force bases throughout the world. Right out of Architectural school he started working on many large, complex sports projects across the country including Chase Field, Miami Heat Arena, an Olympic Stadium in Atlanta, and Madison Square Garden. While this work was rewarding, all of the required travel meant he only saw his wife and two small children on weekends. Looking for a change that would allow more time with his family, an opportunity of a lifetime opened up. Nationwide was planning to develop a district around their newly designed Arena. Consequently he moved with his family to Columbus in 1999 and has since worked on many notable Columbus projects, including: Huntington Ballpark, The Scioto Mile, Nationwide Arena District, Northbank and Parks Edge condominiums. Danial has also been involved in the local design community as a guest Critic for the Knowlton School Architecture and served as a board member for the Center for Architecture and Design.

Random thoughts overheard in our studio. 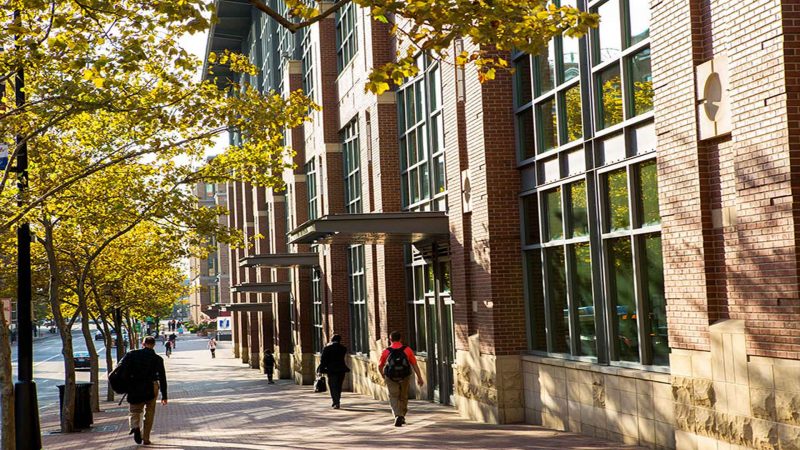 It was 20 years ago that Nationwide Arena opened at the corner of Nationwide Boulevard and Front Street as the home of the National Hockey League expansion team the Columbus Blue Jackets. Architect Dan Hanes describes the area pre-arena as “basically parking lots, with a few small buildings here and there.” Hanes’ firm at the time, Heinlein Schrock out of Kansas City, partnered with NBBJ on the arena’s design, and Hanes set up shop in Columbus to help Nationwide Realty with offices, condominiums and apartments. The 200-acre district now stretches to I-670 on the north, the Olentangy River on the west, North High Street on the east and West Spring Street to the south. Parks Edge and the Chipotle building will continue a design tradition that emphasizes brick facades with a striking incorporation of glass.

A Rental to Renovation Posted by Stephanie Hayward April 5, 2017

Taking our work home with us in the most literal sense. Stephanie shares her own experience renovating her home.